The creation of this Monte Cristo Sandwich Bake recipe was sponsored by Mirum, but opinions expressed are my own. 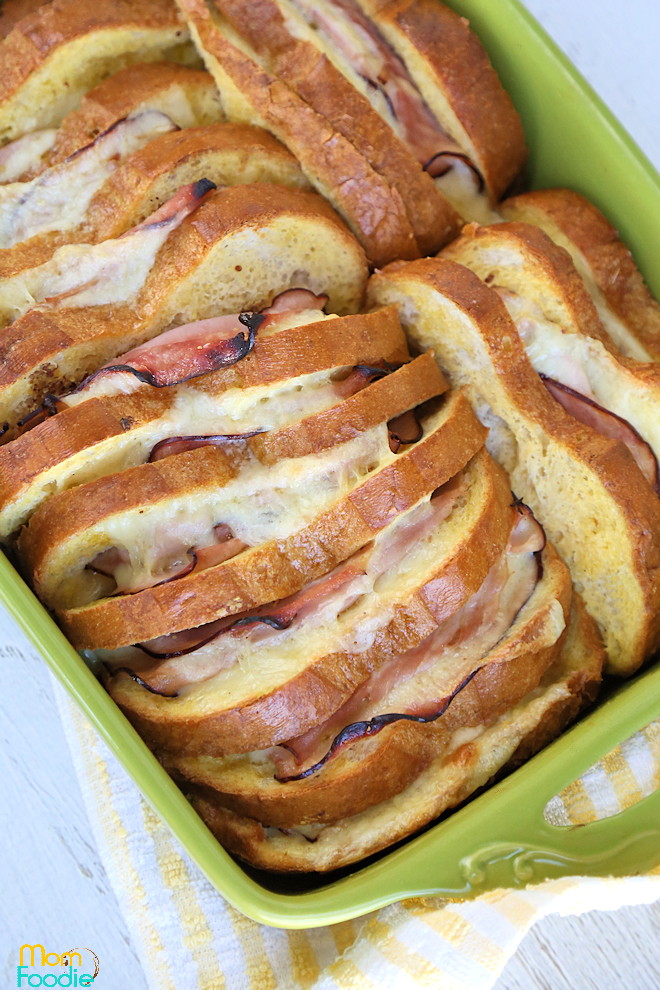 Love Monte Cristo Sandwiches and want to make them for the whole family for brunch? No problem with my Monte Cristo Bake! 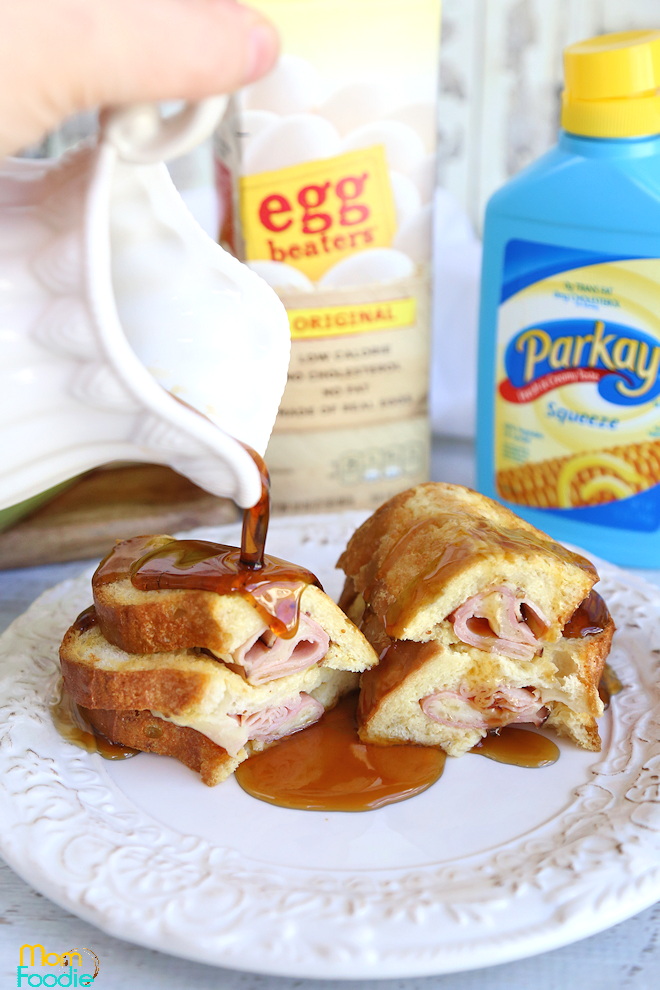 How to Make a Monte Cristo Sandwich Bake

Here is a visual guide to making the Monte Cristo Bake. The pictures make the process clear and easy. A printable recipe card can be found at the bottom of the post. 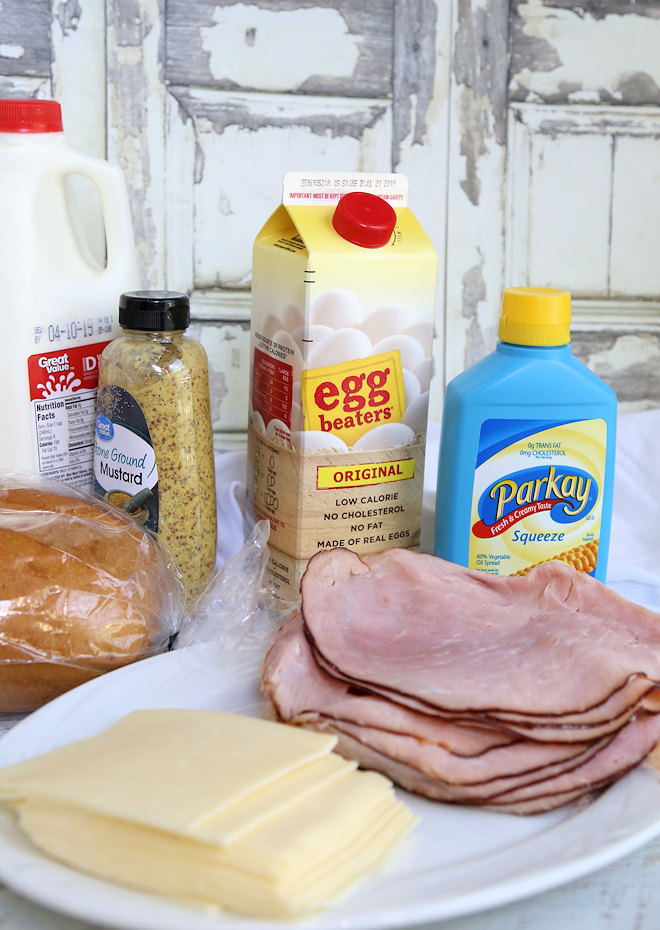 The Monte Cristo Bake doesn't require any fussy ingredients. The Egg Beaters and Parkay Squeeze make this brunch dish even easier. Other than those items, you just need bread, deli ham, cheese (I used pre-sliced Havarti), mustard and milk. You will also want maple syrup or strawberry preserves to serve it with. 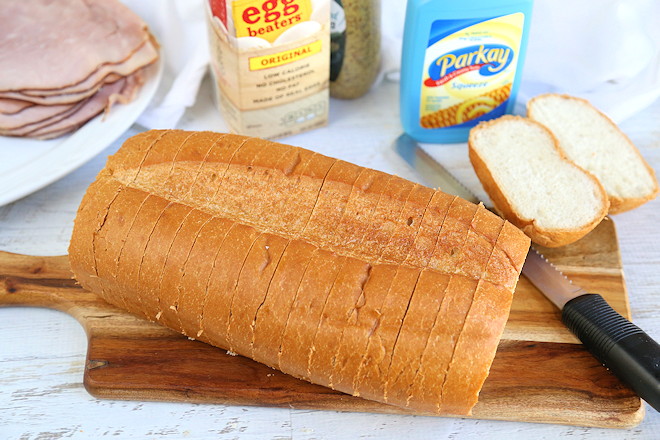 First preheat your oven to 375 degrees. Then, cut off the ends of a big Italian bread loaf and make slices about a ½ inch apart nearly through, but not fully cutting through the bottom of the bread. If you prefer to use smaller loaves that is fine, but you may need two. I don't suggest skinny bread like baguettes, as the ham and cheese will be too wide. 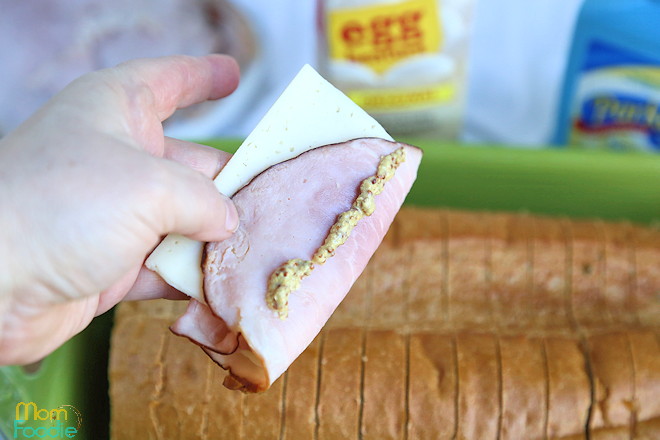 Take a slice of cheese and fold a piece of ham over it. Tuck extra ham in. Squirt or spread a little mustard on the ham. Tuck between two slices in the bread. Fold the cheese in if it sticks over the edge. 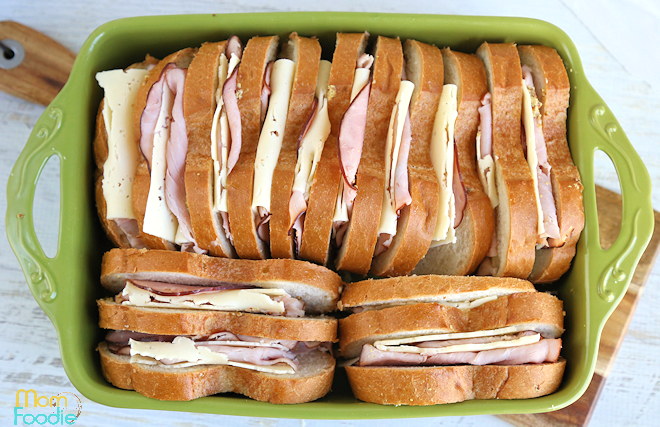 Repeat until all the gaps are filled.  Although this is a sandwich bake, don't skip any. Nestle the bread into a large casserole dish/ lasagna pan that has been coated with non-stick cooking spray. Don't have any spray, no worries, the Parkay Squeeze can handle that, just squirt a little in casserole to grease it with. 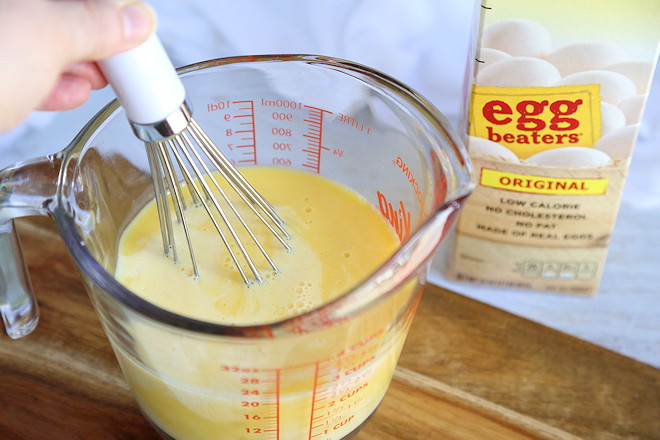 Now mix the Egg beaters and milk together. 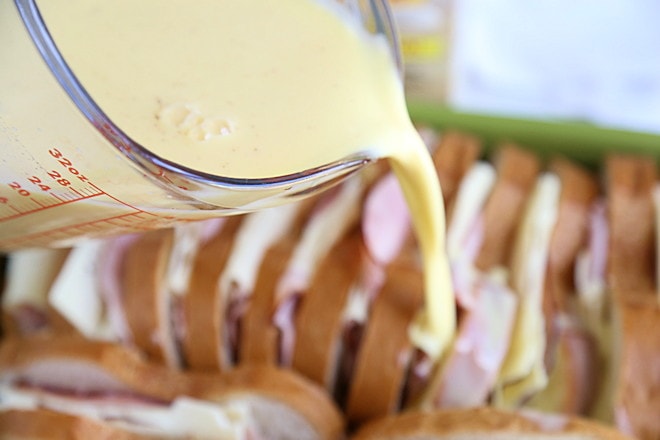 Slowly pour the mixture over the giant sandwich. Saturate as much as you can. It will soak in quickly. If a lot pools at bottom of the baking dish, drain it off and pour back on. A little pooled at bottom is not a problem. It will soak in while baking. 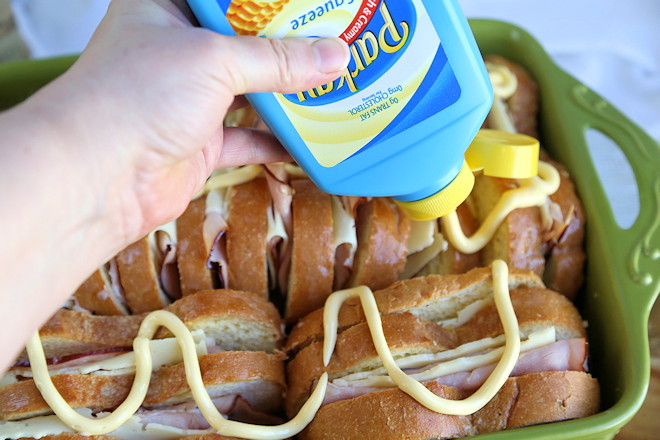 Grab your bottle of Parkay Squeeze and generously squeeze in rows. Don't leave gaps of more than an inch between the lines of the spread. 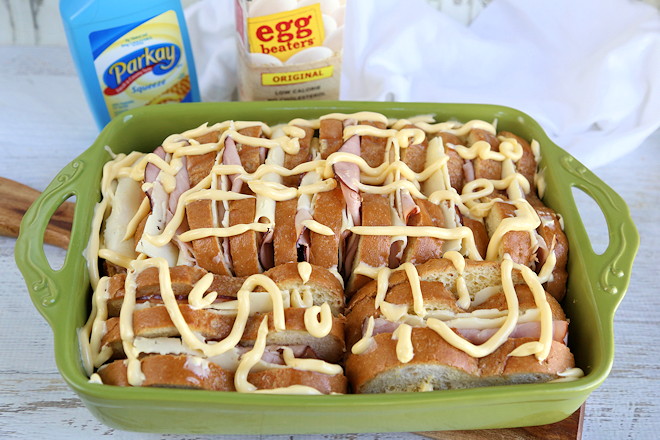 Your Monte Cristo Sandwich Bake will look like this when ready for the oven. Now pop it in for 30-35 minutes. 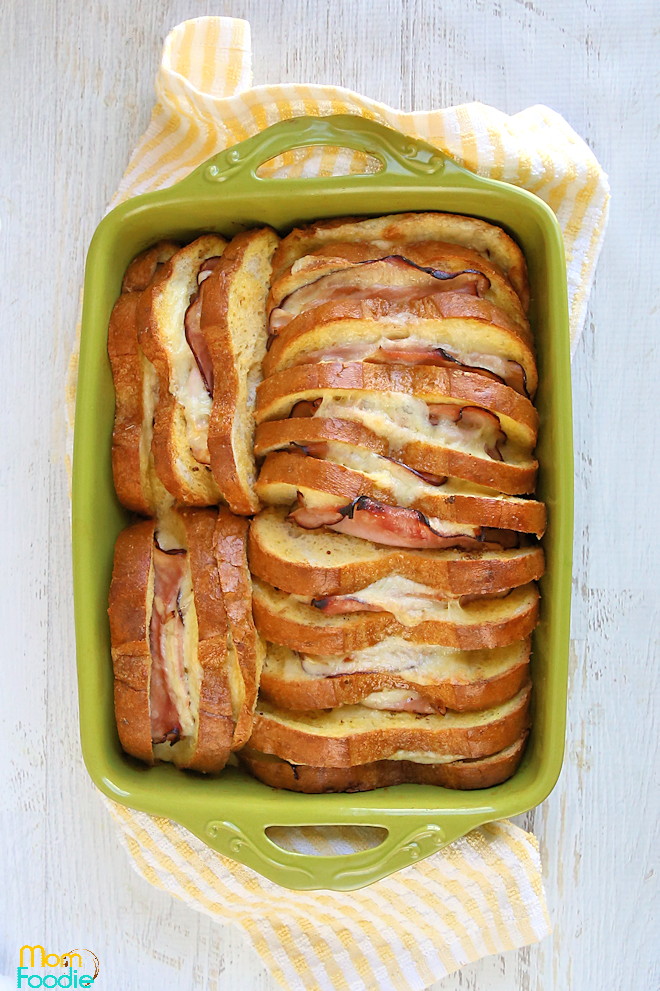 When the egg beater mixture is cooked and the edges of bread have crisped the bake is done. Keep an eye out that the ham edges don't burn during those final minutes. I a little browning as shown here is good though. 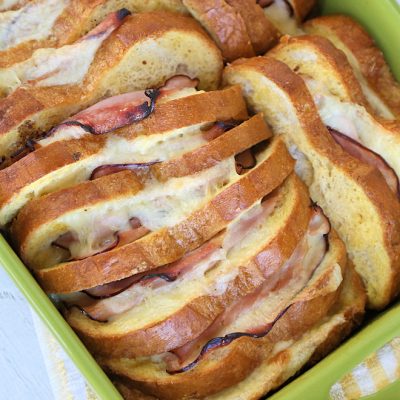 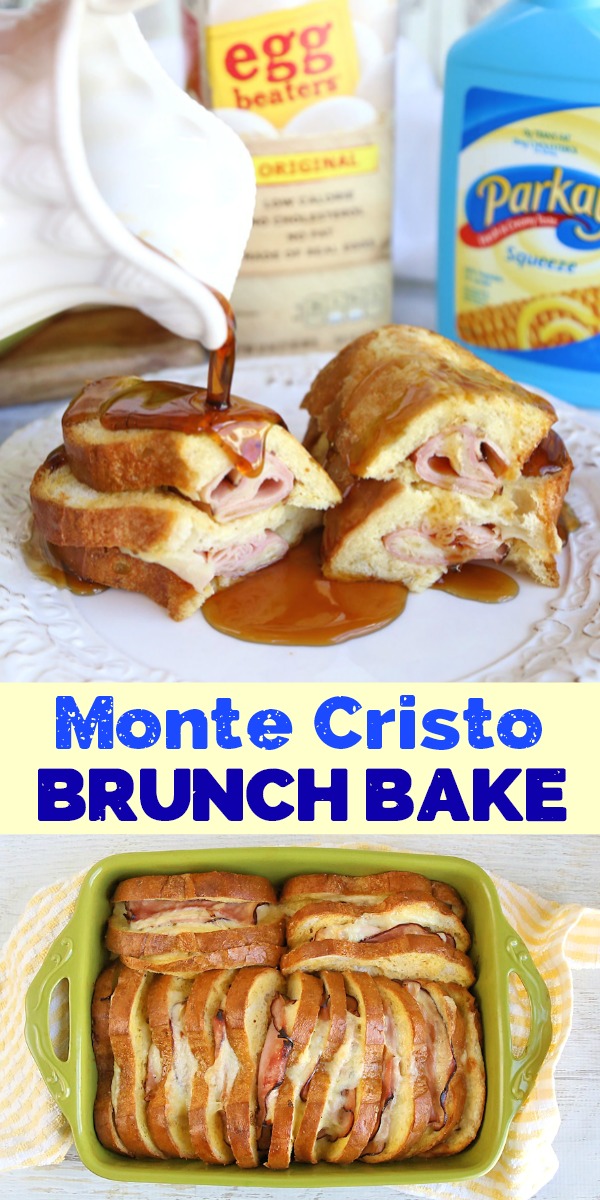 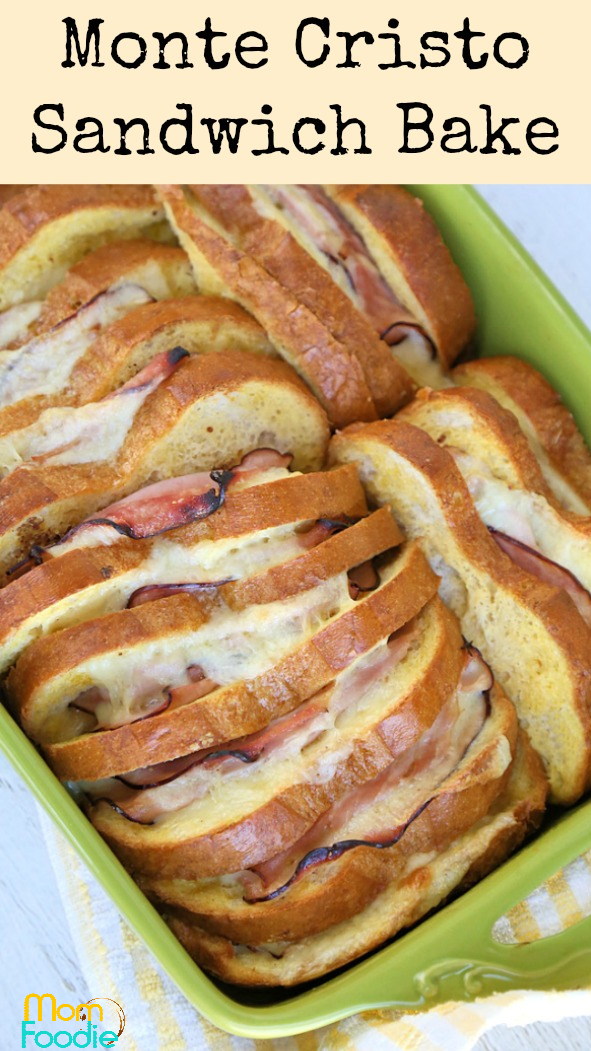