This easy to make Million Dollar Pie recipe is one that should absolutely be in everyone's recipe box. A classic diner pie great for any occasion, especially the holidays.

The no bake icebox pie features a delicious creamy filling with shredded coconut, crushed pineapple, chopped pecans. The dreamy whipped topping and sweetened condensed milk mixture of the Million Dollar pie filling flavor is balanced out with the addition of lemon juice, then nestled in a graham cracker pie crust and a maraschino cherry on top of each luscious slice!

Million Dollar Pie is such a popular classic no bake recipe. It is also commonly known as Millionaire Pie and originated in the Southern part of the United States at a restaurant called Furr’s Cafeteria. The original old fashioned version of Million Dollar Pie did not have maraschino cherries on top. They had another version with cherry pie filling in it, which they called Billionaire pie.

The delicious pie is particularly popular during the holiday season as well as for summer cook-outs and potlucks. Old fashioned Million Dollar pie is one of those pies you probably remember your grandmother or an aunt bringing to holiday dinner each year.

Old fashioned Million Dollar Pie can be made a few different ways, so there are many different recipe variations out there for this scrumptious no-bake pie. All use a graham cracker crust (I don't recommend a regular pie crust for this pie).

While some use cream cheese, this is a sweetened condensed milk version of the recipe. When made with cream cheese, sugar and vanilla extract are also used. Frozen non-dairy whipped topping, thawed is traditionally used in either version. Using cream cheese makes more of a cheesecake version of the pie, than the authentic recipe, but it is also delicious.

The coconut crushed pineapple pie is also referred to as Hawaiian Million Dollar pie sometimes too... for obvious reasons. Toasted coconut typically is used as a topping too.

Mandarin oranges are a popular addition to the top the pie and they can add a fresh bright feel to the pie.

Mandarin orange slices are even small enough to mix into the filling. Canned peaches are a topping of choice as well, especially in Southern states.

No matter what you call it, the rich decadence of this easy to make dessert is sure to make you feel like a million bucks! Even with inflation that's a nice tidy sum...lol.

How to Make Million Dollar Pie

Let me show you how to make this delicious old fashioned no bake dessert. It is a super easy recipe.

Print recipe is found below, which makes two pies. If you just want one pie, you can always freeze the other for later.

The recipe makes two Million Dollar pies, each with 8 slices.

This is one of the easiest pies you will ever prepare.  Making it requires no cooking at all.

First mix together the pie filling ingredients in a large mixing bowl. Start by mixing together the sweetened condensed milk, canned pineapple and lemon juice , then stir in the coconut and pecans and finally fold in the thawed whipped topping.

Next, pour the creamy filling mixture into ready made graham cracker crusts.

That is all there is to it! Refrigerate until ready to slice and serve. Top each slice with a big dollop of fresh whipped cream if you like.

Of course if you prefer making your own homemade graham cracker pie crust, be my guest. I left easy directions right above the recipe card.

To add more texture and toasted flavors to the million dollar pie recipe, top it with toasted coconut and pecans.

To toast them: spread the reserved pecans and portion of the coconut for topping out on a baking sheet. Bake at 400 for just a few minutes until edges of coconut start to brown. Cool before placing on the pie.

While the red and white look of this Million Dollar pie is already a festive look for the holiday season. Before serving, add some green jarred cherries along with the red ones for a full on Christmas dessert. Try chopping some up and adding them to the creamy filling too.

MAKE YOUR OWN GRAHAM CRACKER CRUSTS

If you don’t want to get the ready made graham cracker pie crusts, making one for your Million Dollar Pie is pretty easy.

You will need these ingredients to make your pie crust and an 8-9 inch pie pan:

If you make this rich and creamy pie recipe. I'd love to hear how it came out and any fun changes you make. 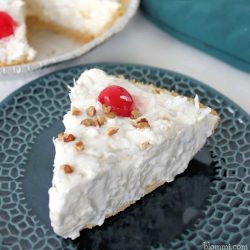 Here are a few more yummy and easy to make no bake pie recipes to try. All are tried and true.