Love potato salad? Instant Pot Potato Salad is something you just have to try. Pressure cooking makes preparation quick and easy and the results are fabulous.

Loaded Potato salad in creamy mayo and sour cream dressing with crispy diced bacon is a great barbecue side dish or serve it up with any meal. It tastes like a loaded baked potato, so good and eats more like a meal than traditional potato salad.

Why Make Potato Salad in an Instant Pot?

Cooking potatoes in an Instant Pot is a wonderful way to make sure they maintain rich texture and nutrition. Pressure cooking provides the best texture for potatoes because it cooks them in a moist environment without water logging them.

The Instant Pot of course cooks the potatoes a little faster, but also reduces nutritional loss through cooking. Many say it is the best way to make potato salad and once they have tried it they will never go back to boiling on a stove top.

Let's get down to making this delicious pressure cooker potato salad with hard boiled eggs, bacon and cheese.

Dice the bacon. Set instant pot to sauté. Fry the bacon pieces until crispy. Remove onto a paper towel to drain and set aside. Pour the grease out of the pot into a grease jar for later use or discard.

Wash and cube the potatoes into bite-sized pieces. Put the potatoes and eggs into the instant pot (eggs on top). Add cold water. The eggs and potatoes will not be fully submerged.

Tip: If you have a steamer basket use that to hold the potatoes and eggs. Steaming gives you a better texture.

Seal the lid and latch the pressure valve to the sealing position. Pressure cook on high pressure for 8 minutes, then naturally release pressure for 10 minutes.

Drain the tender potato pieces. Refrigerate the potatoes to cool for 30 minutes. Peel the cooked eggs and dice them.

While this delicious potato salad recipe mimics a fully loaded baked potato, you can make instant pot potato salad so many ways. Try adding or swapping in some of these ingredients when making potato salad in the Instant Pot.

What are the best potatoes for Instant Pot potato salad?

While Russet potatoes are the type of potato used in this recipe to most closely resemble the fluffy texture of a fully loaded baked potato, that variety is typically not my first choice. Yellow potatoes, such as Yukon Gold are a great choice, as are red potatoes, which have a thin skin and great texture.

You can pretty much use any variety of potato to make salad with. Waxy potatoes will hold their shape better, but have a less fluffy texture.

Do you need to peel potatoes for potato salad?

The potato skin has lots of nutrients. When making potato salad I usually leave the skins on due to this and for texture, but go with what your own family prefers. If you want to make potato salad without the skins on, peel the potatoes with a vegetable peeler prior to cooking.

How do I store loaded potato salad?

Place the cooled potato salad in an airtight container or cover the bowl snugly with plastic wrap. Put it in the refrigerator. If promptly stored and kept refrigerated it should last 3-5 days. [ref]

I hope you enjoy this loaded baked potato salad recipe. Let me know how you like making it in the pressure cooker. If you need a couple more salads for a gathering, try my green pea salad or classic macaroni salad. 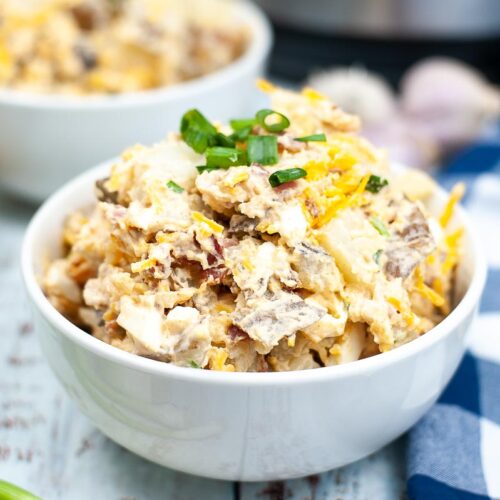