Crock pot corn casserole is a delicious cheesy corn dish, with sour cream and Jiffy corn bread muffin mix. A combination of whole kernels and creamed corn give this side dish an amazing texture. It is a fabulous Thanksgiving side dish, that you will make year after year!

Making this delicious holiday side dish in the Crockpot opens up more oven and stove top space. As we all know cooking space is at a premium while preparing a holiday meal, particularly Thanksgiving.

A crock pot corn casserole solves oven space issue. Having a large casserole dish in the oven can hold up other dishes and make dinner long to cook. The slow cooker version is easy to place aside out of the way. I am also a fan of Crock Pot Mashed Potatoes for the same reasons.

This slow cooker Corn Pudding Casserole is not just served during the holidays though. It is also a popular side dish to serve with barbecue and at potlucks and picnics. After all slow cooking is a method that doesn't heat up your house in summer months.

It's certainly a versatile comfort food recipe and well suited to additions. You could serve with any family dinner! Try it with my Crock pot Chicken Thighs or Air Fryer Chicken Drumsticks.

Origin of the Corn Casserole

Forms of this dish have been around in some form for centuries. Native Americans made a simple version from fresh corn cob scrapings and the dried corn meal was made into corn pone. Corn pudding is a blend of the two, mixed with typical European custard ingredients. [source]To suit modern tastes other seasonings and ingredients are also often added (see variations below).

How to Make Corn Casserole in Crock Pot

Here is a visual guide to preparing this easy to make Crock Pot Corn Casserole recipe with pictures. The printable recipe card can be found below, so feel free to jump down if you prefer.

What You Will Need:

The prep work for this recipe is very quick and easy.

Start by adding the 2 cans of corn to a large bowl, one of kernels and one of creamed corn. This mimics the sweet corn kernels being scraped off the cob along with the milky scrapings.

Then mix in the cheddar cheese. This is also when you would toss in other add-ins.

Coat the inside of a slow cooker with non-stick cooking spray. Then dump in your pudding mixture.

Cover and cook on high for 2 ½ hours. Check to make sure the center is fully cooked through before shutting the Crock Pot off.

Here are a few simple variations of the Crock Pot Corn Pudding Casserole you may like.

Here are a few tips on saving leftovers from the crock pot corn casserole recipe.

Yes, this will freeze fine. I would personally only use freezing for leftovers though. I expect it may take nearly as long to reheat this entire casserole as it would to simply cook a fresh one.

Are corn pudding and corn casserole the same thing?

Yes, they are one and the same. A creamy scoopable corn dish, made of a mix of canned kernel corn, cream corn, cornbread mix, sour cream and cheese.
They are not the same as cornbread which is sliced or baked in individual servings.

How long does corn casserole last in the fridge?

Packed in an airtight container or well covered and refrigerated, leftover cheesy corn casserole crock pot dish will last up to 5 days. After that you are pushing your luck. Like most dishes, it should be placed in the refrigerator after less than two hours at room temperature to avoid bacterial growth.

Now that the Thanksgiving corn side dish recipe is covered for every year to come, here are a few more easy to make sides. All are perfect recipes for your holiday meal.

Let more know how your Crock Pot Corn Casserole turns out. I'd love to hear about ingredients you swap and hacks you use. This is very helpful to future cooks making the dish, especially when in the middle of cooking Thanksgiving dinner. 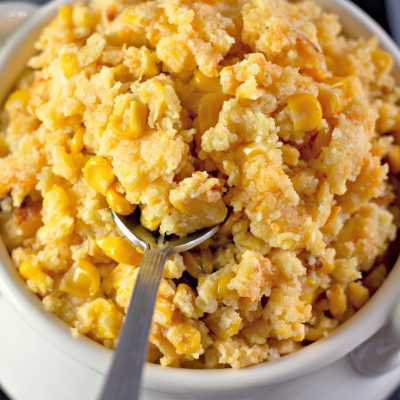 Make sure to get corn bread mix not corn muffin mix, since the latter is sweeter.