This easy Asian cucumber salad recipe makes a absolutely delicious refreshing cold side dish. The cool cucumber salad has a mildly sweet and spicy sesame dressing and is tossed with onions and sesame seeds. It is also called Sunomono, Japanese cucumber salad and Smashed cucumber salad.

The crisp cucumber onion salad not only goes great with Asian inspired dishes, but also makes a great combo with BBQ meats or all sorts of sandwiches. While it is far less salty and sour than pickles, it can pretty much be served with anything they are plus more. Even if you don't love cucumbers you may well like this salad.

The salad is gluten free, nutritious and delicious. Make this crispy cucumber recipe. I believe it will soon become one of your favorite summer side dishes!

Honestly until I started making Asian cucumber salads, I had never smashed a cucumber before slicing it. The step makes a lot of sense when making a salad like this though.

One of the biggest difficulties in making a good cucumber salad is avoiding watery dressing. Cucumbers are already challenging to get salad dressing to adhere to well. Getting excess water out of them helps reduce water seeping from the cucumber and thinning the dressing.

Salting cucumbers before using them in a salad helps pull out liquid and smashing the vegetable before slicing opens up the cucumber flesh for the salt to do it's work. The Asian dressing can also seep into the tiny crannies created when the cucumbers are smashed, adding flavor.

What Type of Cucumbers to Use

I don't recommend using the regular cucumbers most Americans tend to use in salads, as the centers tend to be softer and seedy. The skins are tough also. We want crunchy cucumbers, but not chewy skin.

How to Make Asian Cucumber Salad

Let's make this easy cucumber salad with fresh Asian dressing. I've included step-by-step images with the recipe to help guide you. If you prefer, jump right down to the printable recipe card.

The recipe makes 4 side dish servings.

Ingredients you will need for Asian Cucumber Salad

Instructions for Preparing the Cucumber Salad

Now that you've gathered your ingredients, it is time to prepare the cucumber salad recipe.

Start by peeling the cucumber while leaving strips of the green skin.

Then use a cleaver, rolling pin or small skillet to smash the cucumber. The goal is to break up the insides a bit, not completely pulverize it.

Then chop or slice the cucumbers to your preference. I just cut mine up into bite sized pieces, by quartering and chopping, as shown.

If you choose to go with thinly sliced cucumbers, you can skip the earlier smashing step.

Dump the cucumber pieces into a large bowl and toss with the salt. Set aside at least 15 minutes to allow the juices to seep out.

While the salt is drawing out the moisture, mix up the Asian vinaigrette in a small bowl. I add the liquid ingredients first, then add the garlic, red pepper flakes and ginger. Mix well with a whisk or fork.

Slice up the green and red onions.

Drain the liquid out of the cucumbers and discard.

Return the drained cucumbers to the large bowl, add both types of onion and the sesame seeds.

Pour in the Asian salad dressing. Toss together and serve immediately or refrigerate to serve later.

Making this delicious recipe into a Keto Cucumber salad is really an easy adaptation. The only change to the initial version needed is to swap the honey for a tablespoon of erythritol or a measures like sugar substitute you prefer. The resulting dish will have 35 calories and 3 net carbs per serving!

Of course Asian cucumber salad makes a perfect appetizer or accompaniment to a host of Asian dishes, such as: Mongolian Beef, Pork Katsu, Asian Chicken Drumsticks and Fried Rice.

Pair the salad as a side for sandwiches too. It is nice with a simple egg salad or chicken salad sandwich. It can counteract some of the fishiness of a tuna salad sandwich and goes beautifully with my Asian Chicken Burger!

If Asian flavors are not a good match for your main dish, try my Greek inspired Cucumber Tomato Feta Salad.

It is quite easy to store this super refreshing healthy cucumber salad. Simply put it in an airtight container and store in the fridge. The salad will last for up to 2 days, but quality quickly diminishes. The cucumbers will have lost some of their crispness on the second day. Eating it sooner rather than later is recommended.

It isn't hard to use the leftovers up quick, they are amazingly versatile. I've even tossed some in a chicken stir fry to go in a wrap and the results were yummy!

Can cucumber salad be frozen?

I do not advise freezing the cucumber side dish. It will not hold up well to the process at all. 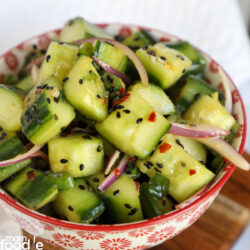 Nutrition estimated based on 20% of salt draining off.